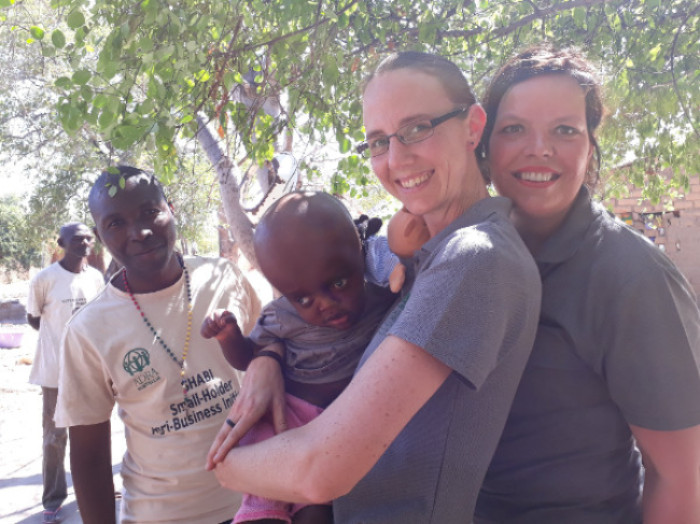 It’s been said that all great accomplishments require four things:  A dream, action, patience, and a whole bunch of miracles … and that’s exactly what SuréTredoux and Anika Meijer (BSR practitioners from South Africa and Holland respectively) experienced when they visited Mfuwe Zambia to work on underprivileged children with various disabilities and autism.  At the outset they literally left SA and Holland on a wing and a prayer, hopeful that they could make a difference, but with little idea of what to expect.

Having never worked in a severely disabled environment (some children with the diagnoses of cerebral palsy, spina bifida and various degrees of autism) neither were sure what their outcomes would be – but they both knew that Body Stress Release, with its intense power to stimulate the nervous system – would likely have some encouraging effects.

They left the parents and carers with strict instructions to look out for anything that might change with the children, and to please record and report back any changes at the next visit.

The results post BSR were quite astounding – and both practitioners were amazed as they were once again reminded that the body has an innate blueprint to heal – Suré and Anika were witness to nothing short of a series of self-healing miracles:

​A Cerebral Palsy child (6 years) who had spastic limbs and couldn’t do anything for herself started to stretch out her hands and could eat and go to the toilet much easier after her second release. After 3 releases her co-ordination improved substantially and she was able to catch objects with her right hand and use sign language to indicate to her mum when she needed to go to the toilet.

A five year old boy suffering from impaired brain development and presenting with spasms and weakness in his right arm experienced some improvement.

Two brothers had distended stomachs and some deformation of skeletal structures.  Their condition was undiagnosed but they both experienced some radical changes between the first and third releases.  By the third release their stomachs were less hard and the swelling had reduced quite substantially, even the swelling in their faces was visibly different. Their mother was very happy to report they also had more energy to help with house work.

A girl aged 11 who was afflicted with an intellectual disability and was unable to speak or use her right hand started to regain the use of her right hand (and carry buckets) after her second BSR session.  By the third release she had further improved and was able to clean up after herself, and was becoming far more expressive with her actions.

A 3 year old boy, who couldn’t talk, started to make gurgling sounds after his first Body Stress Release session and after 3 visits he started to form words and call out for his granny to ask for food – something he’d never been able to do before.

A five year old girl had brain damage and Epilepsy and the untreated fits had caused slight paralysis in the right arm.  After her second release she as able to begin using her right hand to hold a cup and her speech had improved. By her third release she was able to go to the toilet by herself and she was interacting and playing with other children, which she had never done before.

A 3 year old boy who had Cerebral Palsy and Autism,  who used to put everything in his mouth and had little control over his legs, came back after his first session with his mother reporting his body had heated up a lot, he had started to crawl for the first time, and he was eating a lot more.  By the third release he was able to kneel down and crawl, and he was refusing to eat the Nshima (local maize meal), he only wanted to have the cooked up green leaves.

These case studies are only a small representation of the 67 children that were attended to over the three week period. “We felt so humbled by the experience and the incredible healing capacity of the body,” Suré commented, adding that “it’s incredible to witness these sorts of dramatic changes and it’s such a powerful reminder of how effective Body Stress Release is at stimulating the nervous system and how improved communication in the body just triggers the body’s self-healing response!”

Both Suré and Anika have big dreams to continue this type of work with the underprivileged and acknowledge that they couldn’t have done this without the financial support of family, friends and clients who donated to the project.  Their dream is to return to continue the work they started there and elsewhere, where needed.