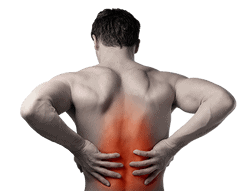 A car accident I had a long time ago caused me years of suffering with shoulder and neck pain, most likely from whiplash due to  the impact.  After a few sessions of Body Stress Release I felt enormous relief and my pains soon went away.  Soon after that, and because of the impact it had in resetting my life, I became a BSR Practitioner, the year my Dad turned 73 years of age.

What motivates me daily, as a BSR Practitioner, is the change I have seen in my Dad’s lower back pain over the years, due to introducing him to my new-found skills.

He has been struggling with lower back pain for years, but not continually, just every so often he would experience a flare-up. I guess the cause of lower back pain in his case comes from being very active in his youth – he played rugby,the hard way, and cycled to work, not to mention the various car accidents he had over the years.  After retirement he kept busy with maintenance on the family house, which led to some heavy lifting, and not bending his knees, as we recommended safeguarding his back!

It was the year I qualified as a practitioner that we got a huge fright. My Dad was getting up from his desk and suddenly he was stuck in that one position. He experienced severe lower back pain regardless of what he did – sitting, standing, trying to lie down, not even mentioning trying to get up. So staying in bed was the only option. My Mum, who was still working,left snacks and drinks on the bedside table during the day.

After a few days he was able to get into the car, though it took him a full 20 minutes and loads of sweating. Arriving at the doctors it was the normal procedure – injections and then off for X -Rays,  which then went on to a MRI scan. There was severe deterioration in the lower vertebra and left Sacro-Iliac (SI) joint. Chances were that he might end up in a wheelchair within a year or two if they did not operate.

There I was, as a freshly qualified BSR practitioner I put my foot down – he was to be my first client and Case Study in lower back pain.  I started my practice in a small town some 600km from my folks,  but decided Dad is coming to live with me for as long as it takes.  For this client I put my foot down!

The drive to get to me was a killer – Dad had to be supported and strapped tightly with an SI belt (those belts weightlifters use), pillows and a warm water bottle to sooth the lower back pain – but we made it and the process started. I carried out the first 3 releases with him either standing, elbows leaning against the wall,or standing on all fours as he could not lie flat on his tummy at all, such was the extent of his lower back pain.  After the first release he was dead tired, but could actually get into bed without taking more than 10 minutes.

The follow-up releases were in quite quick succession. I would say every 3 to 4 days but after the 6th session he started to feel more relief. He was then able to get onto my BSR portable bed – very slowly – with a pillow under his hips to support his back.

After 2 weeks he stopped his elective pain medication and was moving around the house, though still using the SI belt when he was a bit more active, or when we would take a drive in order to get out of the house. In week 3 we had a bit of a flare-up again. He was feeling better and thought it a good idea to hang a few pictures in my new practice room – the stance aggravated his back and the pain came back with a vengeance. Just because you feel better does not mean sufficient healing has taken place. So, in doing too much, too soon, will have the body shouting at you at full volume “…STOP! I HAVE BACK-PAIN…!”.  We see this a lot with our clients, and sadly there are rarely quick fixes. Everyone’s journey to a pain free life is different.

Dad had to stay in bed for a day or two,  but then the difference came. With him being more careful, resting enough and listening to his body, the necessary healing was able to happen. We kept the releases going, once a week. Sometimes I might do a bit extra, in-between,  if I thought it was necessary. It was great having a guinea pig at home to practise on. His lower back pain was getting less and less each day.

After five weeks my Dad was becoming restless, wandering through the house and starting to keep himself busy with small activities. That’s when I knew he has healed to a certain extent and was ready to go home. Trust me,  he was not  100% better,  but so much better, and only if he behaved. On the days when he overdid things,  he rested and the recovery was quick enough though.  We do our best to educate our clients about the healing process – the only difference was this one was my Dad!

After six weeks I took my Dad home. We usually don’t do house visits or transport our clients to and from our practices, but of course my Dad was a different case.  With BSR we find EVERY case is a DIFFERENT case!

A few years later I moved closer to home, and over the years my Dad has had flare-ups again due to his inability to sit still and taking on projects meant for much younger bodies.  But regular BSR sessions keep him going. It is important to keep in mind that he was diagnosed by a doctor, with structural damage to the spine and SI joint (later diagnosed as Sacroiliac Syndrome) and will never fully recover from his back-pain. However this does not mean he has to live with constant back-pain and live his life at half measure. BSR is helping him to live the best and most active life he can.  This is one of our principles in BSR – returning the client’s body to “optimal health” – sadly we cannot undo past damage.

So to end my story on a high – my Dad at the ripe age of 83-years old,  walked the Camino de Santiago last year (a 5-day 200km pilgrimage walk) and I believe with my whole heart it is because of BSR keeping his body more mobile and encouraging his personal self-healing process.

Living a comfortable life and becoming pain free is often a choice, and like my Dad’s story Body Stress Release might just help you in the same way!